Why I Became a Rolfer® - Roger TannerThies 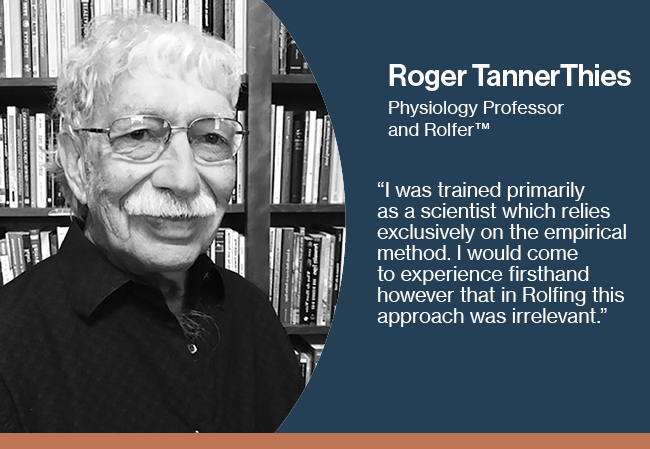 Why I Became A Rolfer

By Roger TannerThies (aka Thies)

I grew up in the suburbs of New York City and was educated in New England with a Ph.D. in Neurophysiology from The Rockefeller University.  I began my Rolfing sessions in 1969 with Stacey Mills, who traveled to Oklahoma City and Dallas once a year from her home in Hawaii.  I attended workshops at The Esalen Institute in Big Sur, California where William Schutz did my second hour.  At Esalen, I remember Ida Rolf and Moshe Feldenkrais walking together as they talked.  Dr. Rolf decided I had good hands, although I was a lightweight at only 154 lbs.  So I audited a class adjacent to The Esalen Institute in the summer of 1971 that was taught by Emmett Hutchins and Peter Melchoir.  Michael Salverson did my 8th, 9th, and 10th hours that summer.

I also engaged in some additional research during the class to please Dr. Rolf - by measuring vital capacity before and after Rolfing sessions I observed significant increases in a few clients. It was an anecdotal study however and results were not consistent, so they could not be published.   In 1971 I was teaching physiology to medical students and other health professional students at The University of Oklahoma Health Sciences Center in Oklahoma City. That summer Dr. RoIf decided to have a Rolf Institute office in Boulder, Colorado.  I took the first Practitioner class, the last basic class taught by Dr. Rolf, assisted by Emmett Hutchins, in the fall of 1971.  A lasting memory was when Emmett and Dr. Rolf pushed down on my back with four skilled hands while asking me to sit tall on the bench.  That is what it took to loosen my tension.  My four classmates included Joe Heller, who later served a term as president of The Rolf Institute, before going on to develop Heller Work.  Judith Aston was developing Rolfing Movement and she took the class on field trips to a mall to observe people moving and guide us in our movements.

For two years I did Rolfing in Oklahoma part-time while still teaching physiology full-time.  I apprenticed myself to Stacey Mills whenever she came through Oklahoma, which helped me learn to use my weight instead of my strength, especially on bigger clients.  I also traded bodywork with Dr. Rolf's friend, Dr. Byron Gentry, a renowned Oklahoma City chiropractor.  His son, Dan, later became a Rolfer.  When I was 40 years old, I gave up my tenure to Rolf half-time and continued teaching physiology half-time.  I also took graduate courses in Human Relations and received a Master’s degree from The University of Oklahoma.  I did Rolfing in Dallas one weekend every other month for a few years until there were Rolfers there and throughout Texas.  Among my clients were Ken Solberg and Norma Bell-Bandy who became Rolfers.  I did Norma's second hour as a demonstration for physical therapy students at Texas Women's University in Denton.  After seeing me work, my 5-year-old told a friend, "My Daddy irons people."

In 1979 I returned to teaching physiology full-time and doing research on the neural control of the heart - I gave up my office practice of Rolfing and traveled some weekends to Tulsa, Oklahoma, and Fort Smith, Arkansas.  About once a year I taught physiology in Boulder for one week in the basic course before Rolfing training.  Early in my career, Dr. Rolf taught us about "tissue memories" – an event that demonstrated this truth to me firsthand became not only formative but instrumental to my practice for the rest of my career.

In my first year of Rolfing I maintained a rigorous schedule, teaching full-time while Rolfing on the weekends from my home. During a church retreat in Texas, I met a Presbyterian pastor in his early 30s. I went on to become friends with him and his family. He eventually went on to become one of the first Rolfers in that state. One afternoon, we were quite far along in our session. Suddenly, he had a flash or recalled memory: when he was a little boy of 11 years old, he was driving the family tractor when it faltered. In an attempt to troubleshoot the problem on his own, he removed the radiator cap. The pent-up pressure caused the boiling water to spray out, giving him 3rd-degree burns on his torso and shoulder.  The memory came to him instantly and for the first and only time since the original incident. After he repeated it to me very clearly, his body position and posture completely released and relaxed.

It's as if he inhaled and took it in once more - and then he let it go and it was gone ultimately. As a young boy, this painful experience initiated a trauma, and a “tissue memory”, that kept his body in a defensive orientation, “guarding” him for the next 20 years. I was trained in neurophysiology, so as a young Rolfer only a year into my career this experience was instructive in revealing how the body and the mind can and do work in a synchronized manner. I was trained primarily as a scientist which relies exclusively on the empirical method. I would come to experience first hand however that in Rolfing this approach was irrelevant. It was quite evident to me from early on that the way my hands sorted out and discovered tension in the system had more to do with an intuitive guiding than a physiological based knowledge of the body.

Every Rolfer is different, but it is certainly my experience and deep belief that to be an effective hands-on practitioner of this work you must be tuned in to the person. It is because of this I always felt that my hands are guided not solely by the evidence or what the client presents, but in concert with one’s own intuition and feel: system to system, person to person. And one sign of a successful session was always feeling more energetic at the end than at the beginning.  That meant that energy was flowing through me, not stopping “at”me.

I recall my career and the training I’ve received with great fondness and respect for those who guided and instructed me. And to this day whether I'm having a cup of tea first thing in the morning or gathering okra from the garden, I always check to see that the energy, is flowing through me.