Why I Became a Rolfer™ - Steven Radiloff 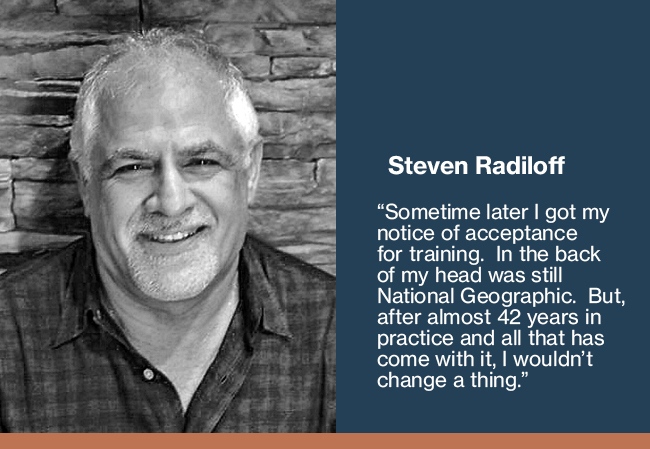 Everything I’m about to share with you is the absolute truth.  I say that because life sometimes has plans for us we never anticipated or planned on.  And often, life’s plans are way more interesting than anything we could imagine or make up.

For me, this was definitely the case…

As a 25-year-old, I did not yet have a direction for my life.  I only knew I was not built to fit into the 9 to 5 mold of working and living.  But I was young, ambitious and had some wanderlust – basically, I was looking for a real adventure.  Something really off the beaten path.  I had already spent two summers roaming all over Europe when in 1973 I heard about an extraordinary opportunity to travel overland from Belgium to the Himalayas. So I went for it.

I had real skills as a photographer and after this adventure, it hit me: I wanted to be the lead photojournalist for National Geographic magazine (quick digression, I published a book about this trip – you can find it in the iBook section of iTunes: “A Moment In Time”). I already had several successful photo exhibits and my work was being sold to individuals and corporations who wanted to use it as a way to highlight their involvement in various overseas projects.  I was taking this plan very seriously and decided to strengthen my writing skills by attending a college with a strong Journalism Dept. I went to UCLA library where I had attended my first 2 years to check out catalogues.

Some of them were quite thick and heavy and as I’m taking one down and putting another back, one falls on my foot and I let out a little yelp. It didn’t fall on my head, but I looked down and saw a front cover photo of a beautiful Fall day at UC Boulder.  I sat down and started thumbing through it, and OMG, just what I was looking for. Very strong Journalism Dept. with rotating published authors as instructors. I went home and told my girlfriend I was moving to Colorado if she wanted to go with me (she’s still there).  So, a few months later we packed up, moved to Denver and rented an apartment. I bought my first house there the next year. I was living a dream and learning so much. I saw my career unfolding in front of me: to travel all over the world shooting photos and writing articles, actually earning a living, being free, creative and living to the fullest.

I really and truly thought I had found my path – and then (remember above when I mentioned “life sometimes has plans for us we never anticipated…”), I started experiencing horrific back pain, especially at the bottom third of my spine.  I just figured it was the accumulated wear and tear from 12 years of organized baseball, 3 years of football, and many hours of lifting and pushing very heavy weight in the gym. I have a pretty high pain threshold, but it was getting the better of me.  I finally broke down and went to see an orthopedic doctor. This is pre-MRI days, so they took a series of x-rays. I met with the primary surgeon and he tells me they found the cause of my pain. “Ok, what”?, he proceeds to explain they discovered a mild case of spina bifida and in normal to severe cases, I would probably be in a wheelchair with a shortened life expectancy.

You can only imagine how that hit me.  I had been very physically strong and healthy my whole life and now looking at the possibility of becoming an invalid.  The doctor said it was now a matter of pain tolerance, gave me pain medication and anti-inflammatories and said when I reached my limit, to come back and they would open me up and basically cement the area.  No orthoscopic procedures yet. Out of desperation, I started taking the meds. I was lucky to not experience any serious side effects but my thinking was not as clear, I tired easily and for the most part, felt listless. I finally decided it was better to be in pain rather than live like a zombie.

But the overall toll started showing up in my work at school. The meds made it tougher to focus and put in the hours I wanted. I was in a particularly bad episode when my closest friend came out to visit.  He told me he had heard of this technique called Rolfing and it might help. If he had said there was a witchdoctor in town I would have booked an appointment. Anyway, I found a Rolfer not too far from where I lived and went to see him.  After about the 3rd appointment I felt a difference.  I was not out of pain, but there was a qualitative difference, some light at the end of the tunnel.  After I completed the 10 series, I was about 75-80% improved. I could have lived with that. I asked him where he learned this unusual form of bodywork and he said right up in Boulder was the International Rolf Institute.  I called and asked the woman who answered a lot of questions, and she said she would send a brochure that would explain the theory, method, and history of Rolfing.

It showed up in the mail a few days later, but I was in the midst of finals and just threw it on the desk.    When I had the time and freedom to read it, it actually made sense to me. I say that because I was the quintessential humanities student.  History, writing, language, music, philosophy, psychology, etc. I had taken Algebra 1 twice, Algebra 2 twice, Geometry twice, barely passed Anatomy and Physiology.  But, it did make sense. At the back was an application for training and to this day I cannot clearly articulate why I filled it out. Intuition, or the “Little voice”, as I refer to it.  But, I did fill it out and sent it in. A few weeks later, I got the invitation for an interview for training. So now, here I am, graduated from the Journalism Department and about to apply with NG for a position.  Once again, I heard the little voice say, “What have you got to lose?”, so I booked the appointment.

When I arrived at Dick Stenstavold’s house, there was one other person waiting and he told me he was an MD.  When he finished and came out, he didn’t look very happy and had a scowl on his face. I was just about ready to get up and leave thinking again, what am I doing here?  Just then they called me downstairs and here’s the scene: there’s one chair at the end of the room for me and 12 Rolfers at the other end. Talk about intimidating. I answered a few basic questions and then Jan Sultan stands up with my 10-question report paper in his hands, throws it over his shoulder and says, “Bullshit”.  I had gotten several anatomy books and reference materials since I had no prior knowledge or understanding of what I was being asked. I had copied verbatim what I thought were the correct answers. From that moment on, I’m talking from outside my body and totally disconnected. Jan comes over finally and puts his hand on my back and says, “He’s gone”. They told me we, “We’re done”, and I got up and left.

As I’m walking to the car, I’m thinking, “Let’s get back to plan A”.  I got a call not too long after and was invited to come back and do it again.  Really, again? But I did, and this time it was much more relaxed and interactive.  Sometime later I got my notice of acceptance for training. In the back of my head was still National Geographic.  But, after almost 42 years in practice and all that has come with it, I wouldn’t change a thing.

Dr. Rolf put tools in my hands that allowed me to help thousands of people and create a life I could have only imagined. I got to meet her once and it was very impactful with only a few words.  I was very active with the Institute right from the beginning and West Coast Regional Chairperson around 1980-1984. With a small group of Rolfers in Santa Monica, we created the first Universal color brochure for Rolfers that sold all over the world.  The same group produced the first video presentation on Dr. Rolf and Rolfing for the general public, which I helped produce. I wanted the energy and finances of the membership to be focused and directed on expanding the visibility, creditability, and value of the work into the uninformed and misinformed general public.  But also, to support Rolfers living and working in smaller and more remote markets.

In addition to the thousands of people I have been privileged to help, I have worked with many athletes from Professional, Collegiate, and Olympic sports of Tennis, Baseball, Basketball, Skiing, and Cycling. Many familiar names from the Entertainment business have been and continue to seek my services. I was invited to work with the 2-time US Olympic Ski Team doctor in his rehab clinic. Johnny Goldberg (inventor and originator of "Spinning"), was one of my clients for several years and I worked as his physical support team during his first Race Across America.  Until Rupert Murdoch bought the team, I was headed to the spring training facilities for the LA Dodgers.

Starting in the '80s, my primary focus was and still is, to be the best practitioner possible.  Anyway, I directed my energies into building my own practice, public speaking about Dr. Rolf and Rolfing and supporting Rolfers and Rolfing in the media.  I began regular speaking engagements wherever I could get "in". First, at small community gatherings at libraries, clubs, company meetings, etc. That led to a series of presentations at the Whole Life Expo. I was interviewed on TV, radio and quite a number of publications.  I was always and remain, an enthusiastic supporter of Dr. Rolf and the work. I have devoted most of my adult and professional life to these principles. To this day I remain truly grateful for what Dr. Rolf and DIRI have given me. Having worked on 4 continents (North America, Europe, South America, and Japan) I have always thought of myself as an unofficial good-will ambassador for Rolfing. It has been quite the run, and often because I listened to the little voice. And somehow, let life reveal and unfold its plans for me.