Why I Became a Rolfer® - Shannon Warwick 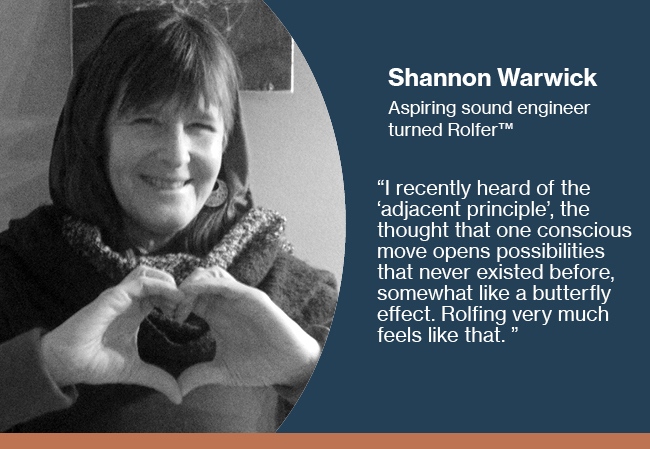 I began playing in the field of Rolfing in 1980, just after Ida took flight. I first heard of Rolfing in 1973, when a childhood friend had gone through the ten series. It not only transformed her stooped shoulders, but also her shy personality dropped by the wayside to the extent that she was voted homecoming queen that year. She suggested if I ever came across a Rolfer, go through the series. Noted.

I knew I wanted to help people, but had become disenchanted with my BSW, pushing paper in political quagmire. Maybe it was the magic mushrooms from Aunt Sally‘s farm (in the month of May, in a field well drained, on a day after rain, with cows fed grain), but at the New Orleans Jazz Festival, I became enamored with the idea of becoming a sound engineer. Seeing wizards at their soundboards creating such incredible magic, sent me packing my bags for NYC. I landed an apprenticeship working for free at Secret Sound Studios (met Tom Waits and SpyroGyra and Emmylou Harris‘ ex that she should have left for Gram Parsons). Waitressing all day at Whole Wheat and Wild Berries, assistant engineering all night, roller skating home in the wee hours because of no other transport west to east, created a constant, excruciating pain in my flat feet and anterior tilted ’sway back‘.

Once I realized I would never make it in the industry, I had time to try to remedy the pain. A podiatrist college wanted to do surgery on my feet with a six-month recovery time. Not an option for a waitress. They created some orthotics for me that helped somewhat. I signed up for a three week Shiatsu workshop with the ulterior motive of receiving a bunch of work and realized I really liked working with my hands. A Rolfer came into a Tai Chi class I was taking, analyzed our structures, took one look at me and said, ’You‘re caving in!‘ I said, ’I know!!! Help!!!‘ and he did.

I wasso astounded how Patrick Clough moved me out of my pain body so quickly, my head spun. I decided to do the 10 Series and about half way through, began to entertain notions that maybe I could actually do this Work.

At the time, there was talk of a NYC school for Rolfing, so I was able to go before a pre-selection committee to see if they thought I was a good fit for the profession. I was encouraged to go for it. However, I felt completely ungrounded and not ready to take on the responsibility of working with people so intimately. So I dusted off my BSW and worked for an Outdoor Therapeutic Program in my home state, running backpacking trips for 10-14 emotionally challenged 10-14-year olds for 10-14 days for about a year and a half. That took care of both grounding me and feeling ready and able to take responsibility for working with others.

I returned to NYC to begin my Rolfing training in earnest, which took a couple of years. Unable to afford massage school, I created on my own equivalent of the foundations program under the advice of the pre-selection committee, I was finally ready and able to train in 1985. I finally completed my advanced training in 1994, miraculously in the midst of single parenting my two year old.

Its been 35 years now and Rolfing has been my sole livelihood. I have so much Gratitude for the privilege and opportunity to feel and see change every day I work and for the flexibility of being successfully self-employed. As a single parent of a challenged son, my practice is one place I can see what I do noticeably makes a difference in my client's lives, unlike the watching a plant grow pace of seeing my son find his way.

I recently heard of the ’adjacent principle‘, the thought that one conscious move opens possibilities that never existed before, somewhat like a butterfly effect. Rolfing very much feels like that. As Rolfers, we are contributing harmony and positive change in these crazy chaotic times. The Work allows us to make this world a better place one body at a time.

HeartMath.org's Global Coherence Initiative found a way to measure the impact of collective coherence, based on the idea if each of us consciously generates a field of love and appreciation in our meditation and daily lives, it will counterbalance all the chaos and strife in the world. What can one person do? Send out good vibes and get Rolfed!