Why I Became a Rolfer™ - Aaron Feldman 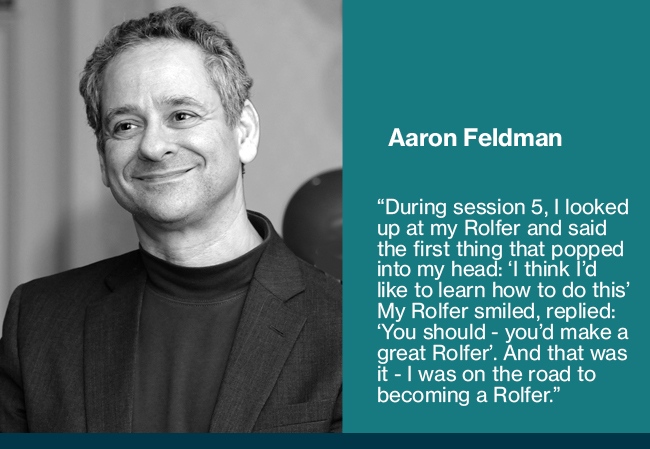 I remember running up the cement stairs, hurrying to catch the Q train, Sheepshead Bay, New York. A large, extra-sweet coffee in one hand, a sack of greasy pastries in the other. My black messenger bag – heavy and bulging with files, thudded against me. My feet pounded the hard cement stairs, one after the other, the force ricocheting into my knees. I heard the approaching WHOOSH of the train. And felt a hot surge of panic. I could not miss this train, the Judge wasn't going to wait for me. This was my life - the life of a litigation attorney in New York City.

And day after day, this was my ritual: wake up – feeling unrested. My mind already racing with any number of things that would and could go wrong. Then, out of bed and coffee/pastry/subway/court. It was high stress, high calorie, and on my poor feet, high impact. My body adapted to a lifestyle fueled by stress, sugar, and caffeine. I put on 25 lbs. My waist ballooned to a 40. My feet became rigid, curled, and club-like from the cumulative effect of the foot-pounds I was exerting on them. But I didn't think anything was wrong or amiss. This was just life.

One night after work, hurrying to my martial art class, I arrived late, changed, skipped the warm-up and quickly strained my quad muscle. Being a harried NY'er, I approached healing as simply the next thing to hurry up and get done. To speed things up, I decided to give Yoga a try. To my surprise, my healing sped up, but my life slowed down. I began to gain flexibility, dropped weight. Started sleeping better, waking up feeling rested, not pre-stressed. At the studio one night I noticed a flyer for “Structural Integration”. Turned out the owner of the Yoga Studio was an SI practitioner.

Yoga had made a big change in my life – now I was curious about different approaches to living, to health – and to not falling back into bad patterns. By this time I was heavily into Yoga - 5 to 6 times a week, but there were certain things I still could not do: couldn't put my heels and toes together because my feet and legs were still suffering from the daily grind of standing all day. Also, I couldn’t get myself into Eagle Pose. I’d made a bet with myself, set Eagle Pose as a bar – and I was a long way from getting over that bar. So one night, I just thought, “Why not try SI, too?”.

I had Zero expectations - it was truly a "What the hell, try it" moment for me. I thought I would try it once and see - what could go wrong? And then the sessions began. Within a week, something changed. I changed. I didn’t slouch anymore. I walked taller, stood straighter. I felt comfortable in a way I never had before – in my own body. My curled, dead feet unfurled like flowers blooming in springtime. And after session 3 – I hit my first, full Eagle pose.

And then, things got strange – good strange. I was Buddha-like calm. Centered and at peace with all the frenzy and chaos that swirled around me. Which is just about when the dogs started showing up. Real dogs – small ones, they'd seek me out – straining against their leash, tails wagging, owners pulled along as they’d come up to me, like meeting their old friend again. Sometimes, to the annoyance of the owners forced from their usual walk by their pets who had a new plan, and a good friend to find. I was never a "dog person" – I’d actually been afraid of dogs and suddenly I was a "small dog magnet". And it felt good to feel and return the care of these furry, grateful little friends. Through SI, I had somehow entered the Twilight Zone. What was even more surprising was the Twilight Zone, was actually My Zone. A place where I felt more at peace with a me I’d long given up on. So my first SI experience turned out to be profound, wonderful and honestly, a bit weird.

But then my practitioner moved away - I figured nobody else would be as good as they were, so I stopped my sessions completely. About a year later during a yoga class I suddenly felt a sharp, flaring pain in my shoulder – an old injury I’d suffered decided to make an appearance. I figured, "Okay, I'll just do less Yoga until the pain goes away". Bad idea. The only thing that accomplished was I did less Yoga. The shoulder pain kept me tense and in pain, I felt myself tightening against it a little more each day. So I tried massage, then cupping, then acupuncture. Nothing worked.

Reluctantly, I went searching for a new SI practitioner - I found a Rolfer about 45 minutes away, in Brooklyn, New York – though I was pretty convinced they wouldn’t actually be much help. By session 2, I was pain-free, with a full range of motion back in my shoulder. My feelings were one – I was relieved to be pain-free for the first time in months. And two, "Hey dummy - why didn't you try this in the first place?". And that's how my second SI series began. During session 5, I looked up at my Rolfer and said the first thing that popped into my head: "I think I'd like to learn how to do this". I don’t remember consciously planning to say that, it just came out. My Rolfer smiled, replied: “You should - you'd make a great Rolfer". And that was it - I was on the road to becoming a Rolfer. Apparently, my body knew it before I did.

So I started researching where to go - when I compared SI schools, (curriculum, cost, etc.) I noticed that the Dr. Ida Rolf Institute was one of the more expensive options – though, not by a lot. But it also offered the most extensive, thorough, training available. By now I was fully committed to making this my vocation, and it only made sense to get the very best training I could – and that meant DIRI. I have never regretted that decision – the teachers are caring, intelligent, thoughtful and have an encyclopedic knowledge of their craft, and the human body. DIRI also has multiple modality learning and a really diverse, interesting and equally committed collection of students. Best of all, DIRI gave me the knowledge and skills I needed, to do what I love the most in life. And that, continues to be priceless.